Doro Nawas to Swakopmund – we drove a long way through the desert. The gravel road became a sand road. It is a little tricky driving on a sand road and it is easy to lose control of the car if you go over 80km/hr.  After several hours, you could see the ocean on the horizon.  At the t-junction we turned south to Heintjies Bay.

I found Swakopmund to be a bit eery at first. But after we checked in at the hotel and walked around the town, I liked it much better. Quaint and quiet with lots of interesting cafes and stores. Way too many touristy shops selling the same things. We had lunch at Pandoros box across from Swakopmund Boutique hotel.  We were told that the town is quiet because most of the people visiting go out on day trips doing adventure sports in the desert (sandboarding, skydiving, quad biking).

The following day we drove to Walvis Bay for a quad bike tour through the desert. It was awesome! Fanie our guide showed us how to not have an accident on the dunes with the quad bikes. He let us have a good balance of a history tour mixed with a lot of quad biking fun.

I somehow talked Carol into going sky diving with me. She really wasn’t keen but was also not totally against it. We did the tandem dive. It’s so simple, in that ‘the guy’ gives you a few instructions on what to do when you jump out of the plane, and that’s about it. Suit up and you’re ready to go. We went up on a little plane, it took 20min to reach the altitude of 10000ft. My tandem instructor and I jumped first. I didn’t feel as scared as the first time I jumped, just a little apprehensive. The free-fall of 30 seconds was over so quickly! Smooth landing. I had my camera zipped in my suit, once the parachute opened, I took a couple photos. 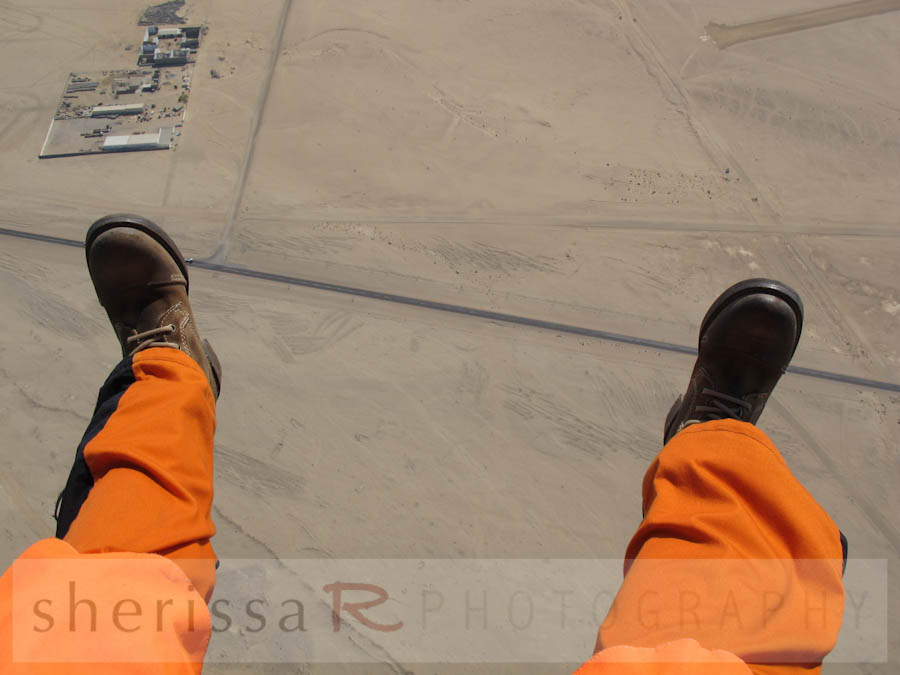 What I loved most about our road trip was the driving. I did all the driving – over 2000km roundtrip. At first it was strange not seeing other cars on the road. There were times when we drove for over an hour and didn’t see another car or person around. After a few days of that, I really appreciated being ‘alone’ on the road.  Carol and I talked but not that much. Mostly listened to music and thought about a lot of things or nothing. Some times it felt like I was in some form of meditation, concentrating on the road, watching the scenery change, not worrying, not stressing, not thinking about tomorrow.

All through Namibia, i found the food to be average. The lodges we stayed at were as expensive as a 4 or 5 star hotel in South Africa – the food was  average. It seemed to me that the lodges are not using trained chefs. On our last night in Swakopmund we decided to check out the pier and ‘discovered’ the Jetty restaurant. The food looked good and the menu was interesting. It was a pity we didn’t find it earlier.

We ended our roadtrip staying at Hoodia Desert Lodge near Sesriem. Beautiful location at the foot of the Naukluft Mountains. Tastefully decorated rooms. Wonderful staff. And a chef that made an effort and seemed more trained than the other lodges we stayed at. Carol is lactose intolerant and a pescetarian, so you can imagine in a country where you are mostly served meat, her meals were not very exciting. The Hoodia chef did try to give her some variety.

The highlight of the trip, visiting the red beautiful dunes at Sossusvlei. Thankfully we paid the extra money and had a guide from the lodge take us on a day trip to the dunes. It was totally worth it. You need a 4×4 to get to the 4×4 parking closest to the dunes. From the normal car parking area it is a 5km walk to the Big Daddy dune. Quite difficult walking through the soft sand. The weather was very foggy that morning around the dunes. 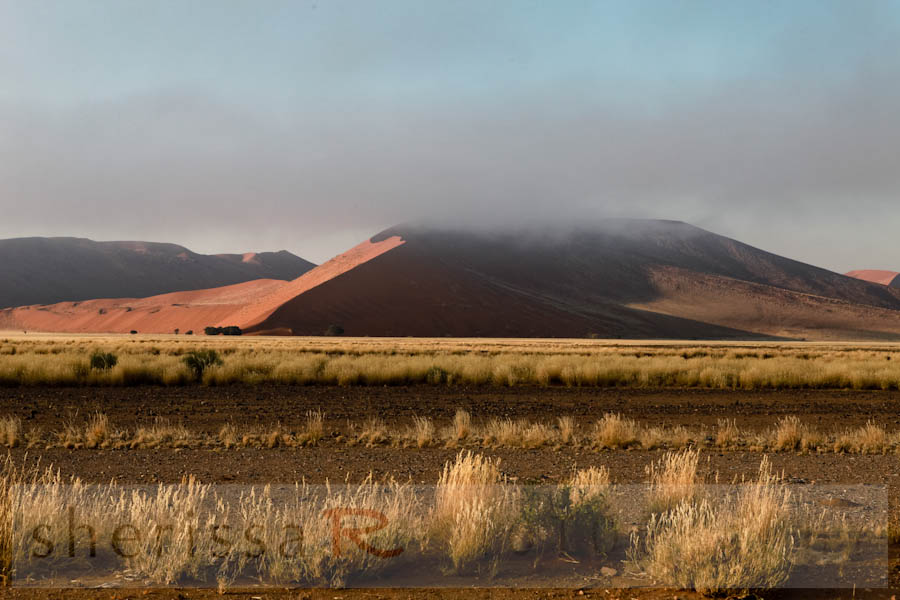 As were driving from the first gate, the dunes were almost completely hidden from view. By the time we reached the top of Big Daddy dune, it had cleared up a bit so we had these stunning dramatic views with the clouds and fog. From the highest point of the dune, we descended almost 90 degrees down to the Dead Vlei. Steep and fun!  Your leg sinks into the sand to your calf. We spent a lot of time at the Dead Vlei, hoping the sun would come out. It didn’t, not while we were there. But I am happy with the photos that I took.  From Dead Vlei we trekked back to the 4×4 vehicle and our guide drove us to Soussesvlei, by which time the sun had come out. He set up a table and chairs and we had tea and biscuits. Walked partially up Big Mamma dune and then around Soussesvlei which we were told is very rarely seen with water in it! Felt very lucky. We headed back towards the main gate (it is a 65km drive). Our guide found a beautiful spot in the grassy plains to have lunch where we had quite a spread! So glad we decided to take the Hoodi a guided tour to the dunes, our guide was brilliant, the tea and lunch were superb.  During lunch there were a lot of tiny birds that were so thirsty and trying to get at any water that we had.  At some point, even bees were seeking out the water.
The next 2 days was a bit of downer as a very strong east wind was blowing non-stop at extreme speeds. The noise was insane. The lodge had a thatch roof but the walls was a tent type material.  It was almost impossible to sleep or read, or think with the noise. Spent a lot of time in the main lodge living area near the fire.  We didn’t get to do our hike in the Naukluft mountains and horse riding at Desert Homestead as planned. However we did take a drive out to one of 2 wine farms in Namibia. The wine farm is situated near a natural crystal spring. The wine itself is not so memorable but I am sure it will get better with time.

Over all, I loved Namibia. I loved the trip. I did not miss home like I usually do when I go on a long holiday. It was so peaceful and except for the wind on some days, very quiet. It was awesome not seeing a lot of other people and cars and buildings and having the constant city life bustle.